skip to main | skip to sidebar

I've been getting a lot of inquiries for sessions as of late. Both from folks that are new-to-Me and not up to speed on My current play space move. As well as some of My loyal stable of slaves and sluts who miss Me terribly and are eager to serve sooner rather than later.

So, in an effort to offer continued training, I am potentially looking at a few days later this month to schedule sessions with some of My established local submissives. If you did not receive an email from Me and are interested in the possibility, do send Me an email.

Labels: about Me, connect with Me, meet Me, out on the town
Newer Post Older Post Home 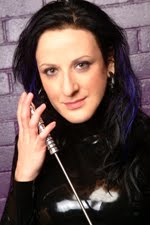 Lifestyle and Professional Dominant, Sensual Spanker, Life Coach and All-Around Playful Pervert living a life of kink and happiness behind the Zion curtain in the beautiful City of Salt.

Curious as to how I spend My days?
I intend to use this blog to document some of My kinkiest exploits, make important announcements, share travel updates and helpful advice, post candid pics of Yours Truly (and some naughty one's too), deliver thank yous, occasional rants, and whatever else My heart desires.

Because it's all about Me.

Not able to serve Me in person?

Wish to get to know Me before submitting in the flesh?

Or simply speak with a compassionate Dominant Woman?

I offer thoughtful phone sessions
on NiteFlirt. Or you could just talk dirty to Me - uncensored.

Charges appear discreetly on your statement as 'NF Services'.